A war story, of sorts—told with the permission of my client, a highly regarded personal injury lawyer.  He is one of those guys all the newbie lawyers regard with awe (as do I) because he’s got mad skills in a courtroom.  He found himself in a bit of a quandary last year, and sought help from someone who knows.

He has a medical malpractice suit currently pending, in which a hospital and several doctors are named as defendants.  In the intervening time since the incidents giving rise to the suit, one of the physician defendants joined the United States Navy, and was stationed at Naval Air Station Sigonella in Sicily. 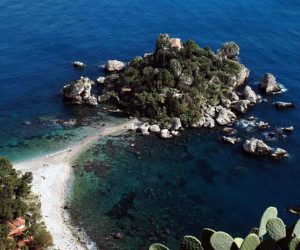 [Not a rough assignment.  Anyplace called the “Jewel of the Med” is a pretty good billet. —> ]

The client called me last summer to inquire about serving the Navy doctor.   An awfully tough goal, I told him, explaining the gist of my recent post “Serving U.S. servicemembers abroad”.

In a nutshell, if the G.I. lives on a military installation, you’re probably going to have to wait until they return stateside.  A number of rules collide to create a real Catch-22 in serving process… our military authorities either can’t or won’t serve process, and the servicemember’s quarters are off-limits to local authorities.  [Hat tip to Yossarian.]

As luck would have it, though, my client had what he thought was a regular address in Catania, the city between the naval base and beautiful, volcanic Mount Etna.  We hired an Italian investigator who was able to confirm that the address was indeed that of the defendant.  The Navy doc had done what I would do in such a situation… she rented an apartment “on the economy”, as the grown-ups used to refer to off-base housing when I was a brat overseas.

Living in civilian housing put her squarely under the jurisdiction of the local prosecutor, who had the responsibility of serving process pursuant to our request under the Hague Service Convention.  Within a few weeks, the Italians sent word that the defendant had been served because the prosecutor had mailed the documents to her apartment.  They returned proof of service for submission to the venue court, going so far as to cite the various sections of the Italian Civil Code that made it effective.  Defense counsel argued that the doctor had never actually received the summons, so the case against her ought to be dismissed for want of proper service.  Counsel asserted that the Hague Service Convention requires actual delivery to the defendant (it doesn’t), that Italian law requires actual delivery to the defendant (it doesn’t), and that the appropriate authority for the venue court to look to was the European Judicial Network (um… I had to look that one up).

The Convention requires no such thing.  It requires only that the Central Authority of the destination state attest to the effectiveness of service according to its own laws, if indeed that service can be completed.  U.S. caselaw, moreover, cautions courts against analyzing matters of a foreign country’s law when the Central Authority certifies that a method of service is valid.  In short, leave interpretation of foreign countries’ laws to the foreign countries themselves.  [Imagine the howls of protest if an Italian court were to overturn the U.S. Central Authority’s certification of compliance with American law!]

Not only does Italian law require no such thing, but according to the documentation provided by Italian authorities, service by mail is specifically authorized.  Indeed, many civil law countries actually prefer service by mail or mere deposit in a defendant’s mailbox.  Things truly operate differently abroad.  The point is, Italy doesn’t require that the summons reach the defendant’s hands, as counsel argued to the court.

Most puzzling, though, was the contention that the European Judicial Network was a valid interpreter of Italian law, superior even to an Italian court.  The closest U.S. analog would be the Judicial Conference of the United States—but even that analogy falls short because the JCUS has actual statutory authority to set certain policy for the federal judiciary.  The EJN, conversely, is a flexible, informal, unofficial group of “contact points” established to facilitate judicial cooperation among members of the European Union.  Hardly an authoritative body.  [The real analogy here would arise if the JCUS were cited as an authority on Florida law, or New York law, or Colorado law.  Simply put, it lacks such power.  And so does the EJN as to Italian law.]

Cutting to the chase, the venue court agreed with us and denied the motion to dismiss.  Very tersely.

The takeaway: my client did it right.  He’s a master in front of a jury, and he’s been highly successful at vindicating the rights of tort victims.  The guy knows what he’s doing.  But he still called in some help when he saw the challenge in front of him.  Rather than spending the time and resources to serve an overseas defendant himself (and thereby save a few bucks on paper), he sought outside help—more cost-effective, accurate, expeditious help from someone who knows the intricacies of service abroad.

Photo credits: **** Main title, from the U.S. Navy at http://www.med.navy.mil/sites/sigonella/clinics/sig/Documents/Hospital%20-2013.jpg  **** Shoreline from the Department of Defense’s Sigonella page at http://www.militaryinstallations.dod.mil/dav/lsn/LSN/IMAGE/IMAGE_CONTENT/2390531.jpg