That Hague Service Request isn’t as solid as you think.

That’s Kevlar® on that kid’s head.  Technically, it’s called “a kevlar” (like your grandpa’s WW2 helmet was called “a steel”), but it’s made of Kevlar® (capital “K”) a little miracle fiber dreamed up by the gang at DuPont Chemical.  It has saved thousands of lives in its five decades on the planet.  Kevlar® is the stuff that makes helmets and bulletproof vests, well, bulletproof.  But any hard-charging operator will tell you that if you don’t wear it correctly, it’s not as bulletproof as you need it to be.

I wrote a few months ago that defense counsel should always question the validity of Hague service that has (ostensibly) been effected on their foreign client.  A request submitted to a foreign authority pursuant to Article 5 must be valid in the first place.  And many times, they’re not valid—even if the Central Authority receiving them doesn’t know it or doesn’t care (most of them never inquire).

Usually, a Hague Certificate is the functional equivalent of Kevlar®.  But if you don’t wear it correctly, it’s not as bulletproof as you need it to be.  A Hague Certificate predicated on an invalid Hague Request is itself tainted.   (Something about a “poisonous tree” tickles my memory from law school.  Yes, I know—that was the exclusionary rule.  This is different.  But it’s the same relative idea.)

How do I know this?  Well, a couple of years ago, I got a letter from the Ministry of Justice in Budapest, asking why I thought I was qualified to sign one of these things.  Those pesky Hungarians, what with their bowls of paprika-laden goodness and their stunning trios of starlets, demanded to know the source of my authority.

Why, the United States’ declarations to Article 3 of the Hague Service Convention, I responded by email:

The persons and entities within the United States competent to forward service requests pursuant to Article 3 include any court official, any attorney, or any other person or entity authorized by the rules of the court.

(Emphasis mine.)  Within 24 hours of my answer, I received a very collegial email from a fellow in the Ministry’s Department of Private International Law …  Thank you, kind sir.  We will proceed with your request forthwith.

But their query got me thinking…  do they actually get invalid requests, signed by people who aren’t authorized?

Not long after my exchange with the Hungarians, a lawyer in Chicago emailed me to ask if the service that he’d had effected on a foreign defendant was valid.  I scratched my head, wondering why he was unsure, but when he sent me the paperwork, it dawned on me.  He had hired a process server who filled out a standard USM-94 and signed the request, citing FRCP 4(c)(2) as the basis for his authority.  Horns and alarm bells started going off in my head.

You see, 4(c)(2) has nothing to do with Hague Requests whatsoever.  It merely says that any adult non-party can serve process in a federal case.  But the act of signing a Hague Request and the act of serving process are not the same thing.  A foreign official actually serves process in response to a Hague Service Convention Request.  The Federal Rules of Civil Procedure don’t govern who actually serves process in foreign lands (nor do state rules, for that matter)—they require deference to the laws of those foreign lands.

I’m adamant that lawyers should outsource the procedures that reduce the efficiency of their practice, and serving abroad is just such a procedure.  But the outsourcing must be done advisedly, and that means ensuring that the Hague Request is signed by a licensed attorney or someone appointed by the court for just such a purpose.

Most professional process servers will refer out this kind of work.  But if your process server assures you that it’s not a problem for a non-lawyer to sign a USM-94, you’ll want to call your malpractice carrier before you engage the process server.   It’s a good idea to let them know in advance that you’re taking legal advice from a non-lawyer.

Photo credit:  United States Marine Corps, photo ID 120601-M-BM244-004, via Wikimedia Commons.  I’m pretty sure this kid is safer than any other human being on the planet… the Marines have his back.

This one is from DuPont’s own website, showing Kevlar® in its stock form.  Neat stuff… 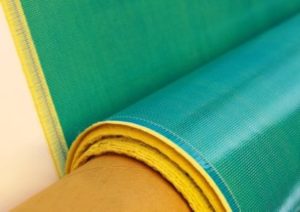